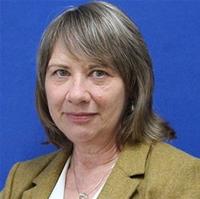 Councillor Chandler has been a District Councillor since 2006, representing Little Stour and Ashstone, the rural ward covers 6 Parishes (Ash, Wingham, Preston, Goodnestone & Chillenden and Stourmouth) on the Northern boundary of the district.

During her time as a councillor she has served on numerous committees and from 2011 to 2015 was the Deputy Leader of the Council with the Cabinet Portfolio for Housing, Children's Services and Safeguarding, Youth and Community Safety. Councillor Chandler is a member of both the South Kent Coast and Canterbury and Coastal Health and Wellbeing Board with a focus on children and young people. She is also a Board member for East Kent Housing.

Councillor Chandler formerly served as Chairman of Governors of Ash Cartwright and Kelsey Primary School for a number of years.

Councillor Chandler's early career was as a manager with a local farming company, following further education in agriculture.

Councillor Chandler is married to Peter, who with his family farms at Lower Goldstone near Ash.  They have a grown up son and daughter and a grandson.

Walking in the local countryside, usually accompanied by the family dog.